From a Richmond Streetcar 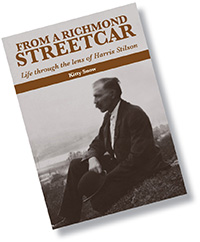 In this digital age when our pervasive (and often invasive) technology puts a camera in everyone’s hand, it’s endlessly intriguing to savor the results of one man’s fascination with people, back when taking and developing pictures was a lot of work. Richmond streetcar man Harris Stilson spent countless hours using his clunky film camera to capture our city and its everyday citizens nearly a century ago, giving us a priceless look at slices of life that the Dementis might have missed. This is a revealing and affectionate record of where we’ve been, as told through Harry’s prolific images and narrated lovingly by his great-granddaughter Kitty Snow, who’s fallen into the bottomless pit of memories in her quest to put names with these unforgettable faces. From A Richmond Streetcar proves to be an important missing piece of the big quilt we all call home.